Skip to content
Dave and I are now in Dalat; we arrived here after a 7 and a half hour $7 each bus journey yesterday (Monday 14th April). Thankfully it had loads of leg room, reclining seats, air-con, free blankets and bottled water, rest stops for the loo and a lunch stop; plus an on-board young lady called Quing who kept checking up to make sure we were both okay being the only Westerners on the bus. Much better equipped than your average British coach and they even went out of their way to drop us off right outside our Hotel here in Dalat. For a mere $20 a night we have an immaculate double room with shower and satellite TV and including a full breakfast!
The day before we left Saigon we took a full day Mekong Delta tour – again with Sinh Cafe Tours. It cost about £5 each for a 10 hour day trip! 2 hours by air-con coach to join a motorised boat to cross the Mekong River. 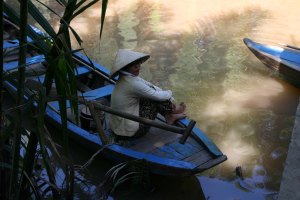 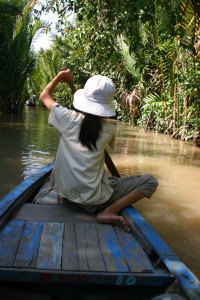 We saw floating fish markets, fishing boats covered with lights which apparently attract the fish when fishing in the dark; went across to a small island called Con Phung where we ate lunch and then cruised again on the boat along natural creeks in the Ben Tre province. A young girl (no gags about child labour please!) and another lady then paddled us in a row boat up a small estuary of the Mekong lined with the typical coconut trees and also water coconut trees which grow under water. We were shown how the locals produce rice paper and coconut candy and had tasters of everything, pretty good actually, before heading back to Saigon. Oh yeah and the guide draped a python around my neck at lunch. 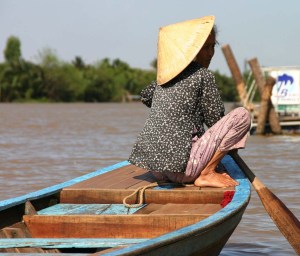 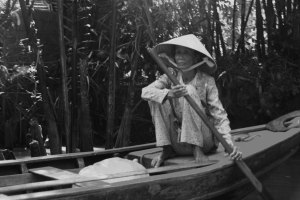 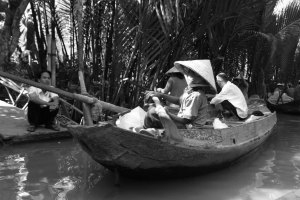 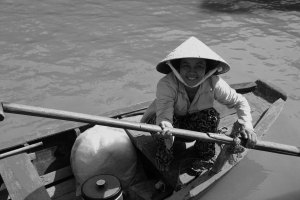 This boat kid was really cheeky but very amusing. 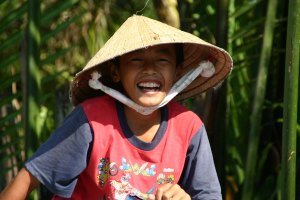 I was far more concerned about what a bad hair day I was enduring than I was about having a python draped around my shoulders. 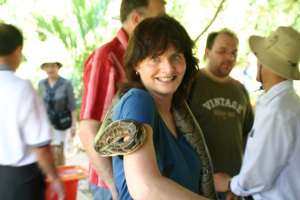 We had to ride on a pony and trap; I don’t know which was more dilapidated, the pony, the trap or the owner of both. 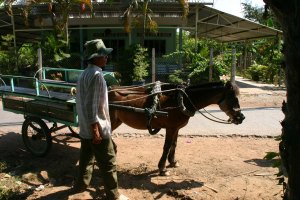 Houses on stilts lining the riverside. 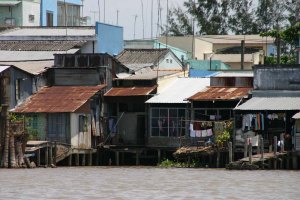 A very strange looking and very long boat; we couldn’t find out what it was for. Note all the plastic green piping running the length of it. 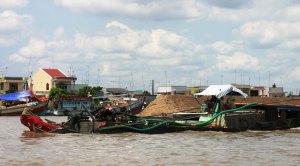 An overloaded boat carrying rice; the main product of the Mekong Delta area. Apparently 80% of Vietnam’s rice is grown in this area. 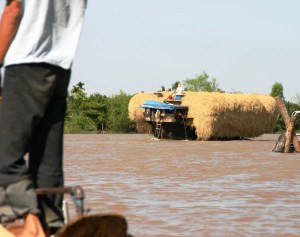 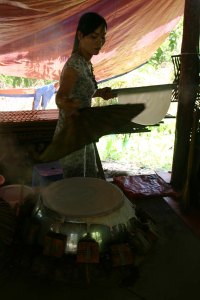 Our guide from Sinh Cafe Tours was very new to his job as Tour Guide but he was excellent. 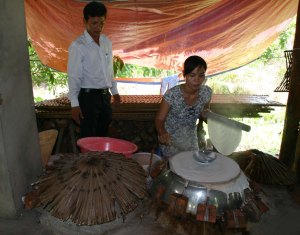 Water coconut which our Vietnamese friend Lin generously bought for us to try; he and his wife Fung now live in America and were travelling on the same tour. It’s not as tasty as the standard coconut; it has very little flavour in fact but it was great to be shown it as we had never seen or heard of it before. 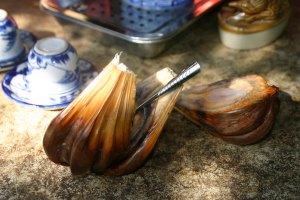 Our guide chopping up the whole water coconut. 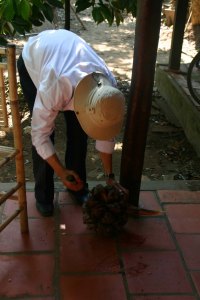