Skip to content
We intended to stay in Hoi An for 4-5 nights and ended up staying there for 10. One of the reasons was that we got totally drawn in by the made to measure tailor shops, the other was that we made new friends in Annie and Quique from America. Hoi An was a very easy place to get sucked in; the city is beautiful, it’s a UNESCO World Heritage site with lots of small streets in the Old Town lined with wooden buildings, crumbling old brick colonial style houses, temples and exotic climbing plants. Plus amazing food – especially at a small family run place called Cafe 43 where we ate about 7-8 times and there are also over 200 tailors shops. The night we arrived on Saturday 19th April they were celebrating the full moon festival. Several streets were closed to motorbike traffic and all the buildings hung with hundreds of coloured silk lanterns. Traditional musicians played in the streets and on boats floating on the river. Children sold small paper floating lanterns with candles inside; we bought one to float down the river which was bobbing with hundreds of candles in different coloured paper floats and reflecting back the jewel bright colours of the silk lanterns in the shops and restaurants lining its banks. It looked beautiful. After a few days of running back and forth for tailoring appointments for new clothes, we ventured out with Annie and Quique to some local ruins called My Son.

Quique and Annie at Mỹ Sơn ruins, pronounced mi syn, a Hindu temple complex in the village of Duy Phú, in the district of Duy Xuyên in Quảng Nam province, Central Vietnam. A one hour drive from Hoi An, the ruins comprise of many Champa temples, in a valley roughly two kilometres wide, surrounded by two mountain ranges.

Dave and Quique. Mỹ Sơn has been dated to have started being built in the 4th century. It was the site of religious ceremony of kings of the Champa dynasty, and was also a burial place of Champa royals and national heroes. The Mỹ Sơn temple complex is one of the foremost temple complexes of Hinduism in South East Asia and is the foremost heritage site of this nature in Vietnam.

Not so 4th century was the experience of getting totally mobbed by a coach trip of 100 schoolchildren; who found us far more interesting than the surrounding ruins. After mobbing us for photo opportunities several of them pounced on Quique and myself for autographs. It was quite a bizarre but hilarious experience and really made the trip as we had so much fun with them. Every time we took a photo we would count down ‘ 1,2,3,4 ha ha ha ha’ and 100 kids all copied us. 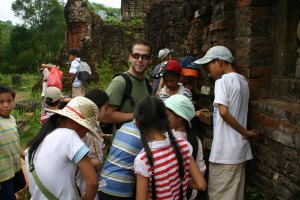 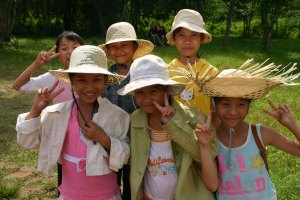 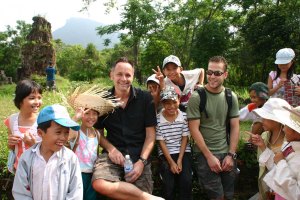 Leza and Annie get completely mobbed! 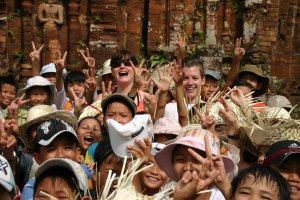 Dave shakes hands with about 100 kids in 10 minutes whilst Quique ponces about with a fan looking rather effeminate – ha ha!

Quique tries out for Mister Universe. 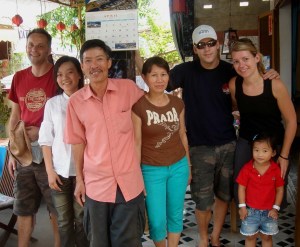 Quique and Annie relax in their monster bed which looked like something a communist leader would sleep in.

Our room; number 306 of the Thien Thanh Hotel, Hoi An.

The view from the balcony of our room overlooking a rice paddy. 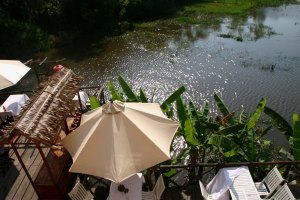 Receptionist at the hotel.

Dave with Van our personal tailor based at 113 Tran Phu Street in the Old Town. Dave ended up ordering quite a lot of shirts and I got a few things made and shipped back so we didn’t have to lug it all around with us. Because we introduced a few new customers to Van she kindly took us to the beach 4 kilometres from Hoi An where she treated us to a magnificent seafood lunch of clams, crab and prawns.

Leane (from Canada) and Fatima (from Sweden) who stayed in the same hotel and also came to get waistcoats made by Van. 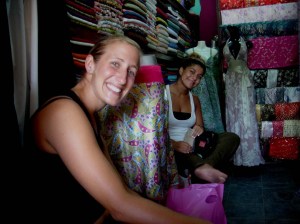 The lady who sells things outside Van’s shop. 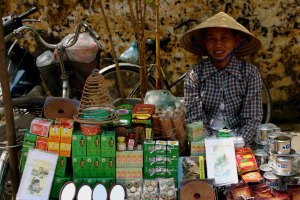 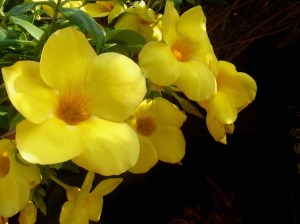 Amazing wooden buildings in the Old Town of Hoi An. Hoi An is located in the Quảng Nam province. The city had the largest harbour in Southeast Asia in the 1st Century and was known as Lâm Ấp Phố (Champa City).It is the former harbour town of the Champa people and sits on the Thu Bon river; an important Vietnamese trading centre in the 16th and 17th centuries, where Chinese from various provinces as well as Japanese, Dutch and Indians settled. During this period of the China trade, the town was called Hai Pho (Seaside Town) in Vietnamese. During the French colonial period (1883-1945), it was called Faifo. 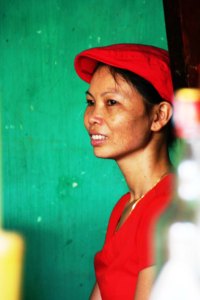 Women wearing traditional hats, pushing barrows up an alleyway in the Old Town. 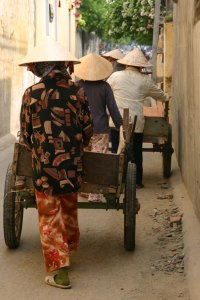 Traditional local slippers which are amazingly comfortable; and the shop’s cat. 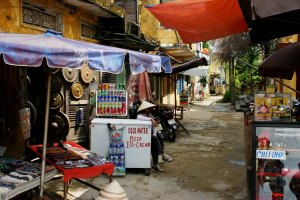 Bicycles seem to be incorporated in to everything, even wedding photos. 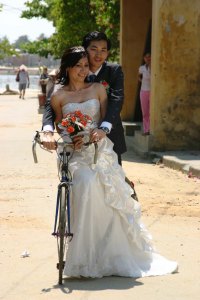 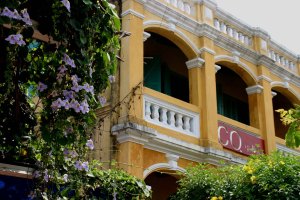 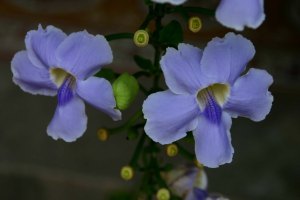 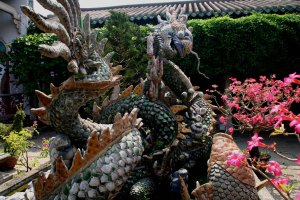 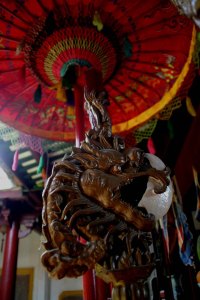 Street life in Hoi An. 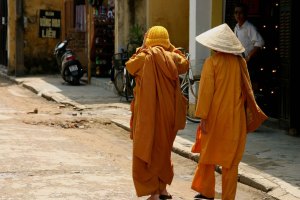 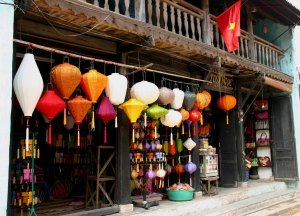 Tailors in a workshop in the Old Town. 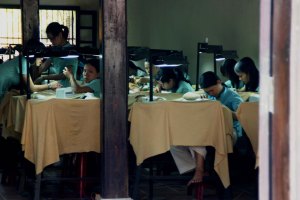 Life on the local river. 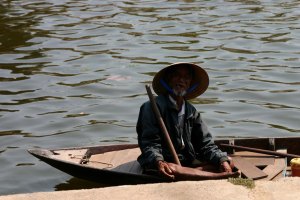