Skip to content
Day 4 in Bangkok (May 21) we had a run around town with Michael, an Australian guy staying at our hotel whose girlfriend Georgie was arriving later that afternoon. I cobbled together an itinerary and our first stop was a snake farm based at the Queen Saovabha Memorial Institute in the Silom/Lumphini area. Originally built in 1923 the snake farm was only the second of its kind in the world (the first was in Brazil). Apparently there are 60 different poisonous snakes in Thailand and this institute which is also a hospital, prepares anti-venom for snake bite victims.

We went to see a venom milking at 11am; one of the handlers struggled to placate an agitated cobra before he could milk it by holding it behind the head and pressing its fangs into a plastic sealed jar. It’s pretty freaky how much venom comes out.

A short cab drive away we jumped out on a bridge to seek The Golden Mount, based on the top of a man-made hill overlooking Bangkok. We asked directions of a local man- what fools – ‘sorry that’s not open until later this afternoon’. ‘you can’t go there now as the monks are chanting….but let me show you lots of other things on your map’ (that actually we have found no evidence of i.e. the black Buddha and the lucky Buddha). It takes a minute or two to twig on because they really are that devious and convincing, but because his patter exactly resembled that of a guy we talked to on Monday, we cottoned on, found the Golden Mount ourselves 5 minutes around the corner, and lo and behold it was open as we expected. 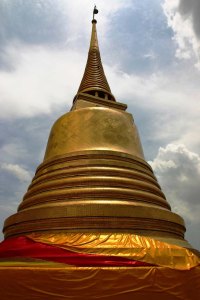 We climbed around 400 steps to the summit where you have to take your shoes off as is custom before entering most monuments, to find that the rooftop was scorching hot underfoot. So we hopped around sheltering our feet under benches in exceedingly small patches of shade when we wanted to stop to take in the views of the city and the impressive sparkling golden mount. Thais really like their glitter and gold. 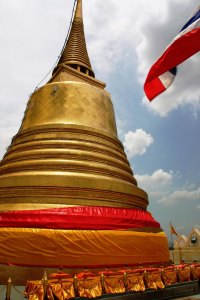 Local people making flower and incense offerings to Buddha at the summit of The Golden Mount. 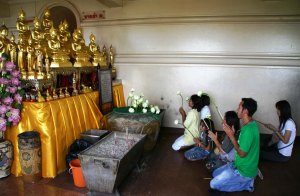 Another hop, skip and a jump in a cab (each cab ride only costs about 1 pound and it gets so hot its exhausting and sweaty attempting to walk it all) we went to a local outdoor market for some local grub before wandering in to the Amulet market where monks, cab drivers and people in dangerous professions come to buy amulets and lucky charms. You see them hanging around necks and rear view taxi cab mirrors all over Bangkok. I reckon cab drivers, tuk-tuk guys and so called tourist police must have the most dangerous professions as they surely hold the highest quotient of how many people want to punch them in the face in any given day. 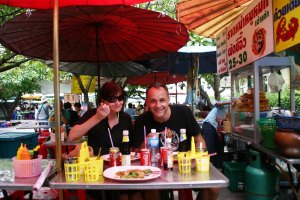 Anyone for a set of used false teeth?

Making amulets. Note the large amulet around his neck.

A monk waiting to catch a water taxi. 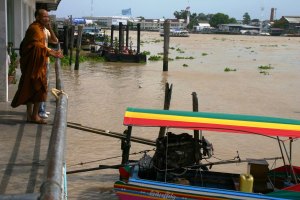 Michael left us here to head off to the airport to meet Georgie. Dave and I hopped in to another cab to the ferry pier and took a quick ferry trip across the river to see Wat Arun, also known as The Temple of Dawn which has an 82 metre high ‘prang’ (Khmer style tower) with very steep steps. I made it about half way because the steps got so ridiculously high I could barely get my legs in to a position needed to climb any further. The tower is covered in mosaics of ornate pieces of broken Chinese porcelain; apparently used a lot in the19th century during the Ratanakosin period when Chinese ships docking at the port of Bangkok used tonnes of old porcelain as ballast. I obviously got that last bit out of the guidebook – ha ha! 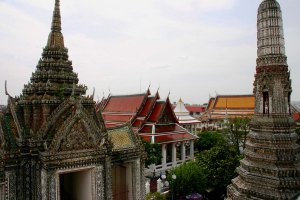 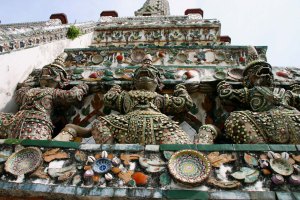