Skip to content
Our last full day in Bangkok today. Hate to make you jealous, but we fly to the beach in Ko Tao tomorrow as we have managed to get a low season deal on a private villa with its own pool. There’s a limit to how many more temples we want to see and Northern Thailand is mostly about trekking – yeah can just see me and Dave battling with leeches and hiking boots – so we have come on all P Diddy like instead. Hope they chuck in a yacht!
Yesterday Dave, Georgie, Michael and I booked the hotel’s mini-bus and travelled 104 kilometres south of Bangkok to the floating markets at Damnoen Saduak; between Nakhon Pathom and Samut Songkhram. 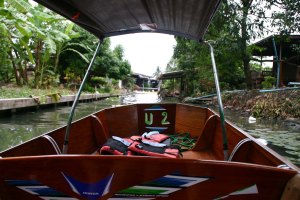 There we picked up a boat which took the 4 of us along the river canal system, through the stilt houses and in to the heart of the market.
Georgie and Michael on our boat. 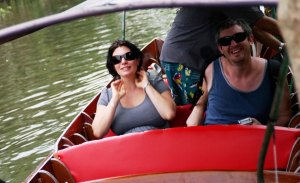 Travelling through the canal system. 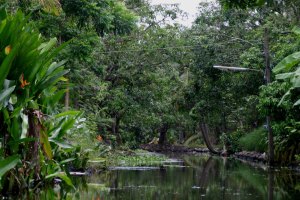 The market isn’t actually floating, you float through it on your boat and you ask the boat driver to stop if you want to look at anything or in some cases some wily shop keeper will reach out with a long handled crook, catch your boat and pull you in to dock at her shop. There’s a lot of tourist tat for sale but the food section was great; lots of fresh fruit and vegetables and people cooking traditional food on their boats which you could pull up alongside or jump off on to the quay to buy and eat by the river.
Fresh spring rolls cooked to order on a boat. 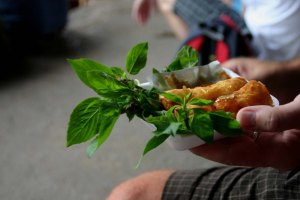 This is to prove that on occasion Dave does actually eat greens. 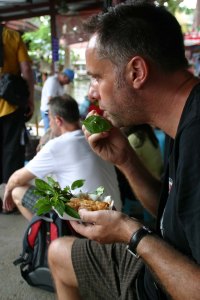 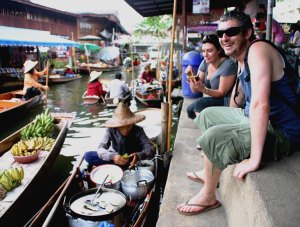 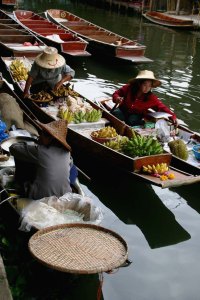 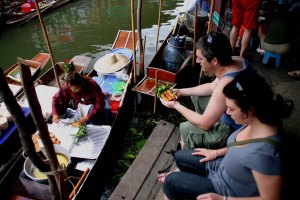 This lady made amazing small dumpling like pancakes filled with greens…… 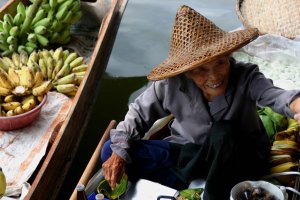 …and served in banana leaves. 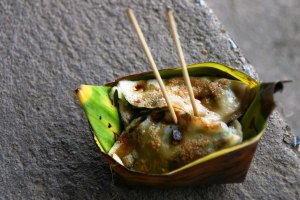 This lady wears an amazing traditional hat. She served us a spongy cake like bread also wrapped in banana leaf which adds extra flavour as well as doubling up as a plate. 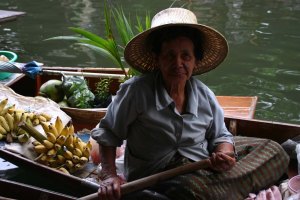 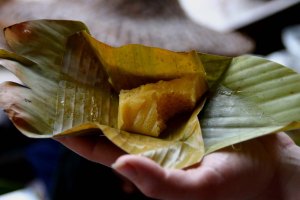 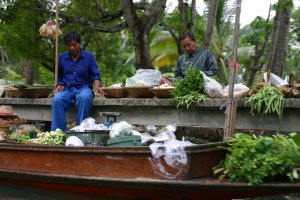 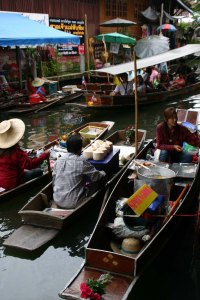 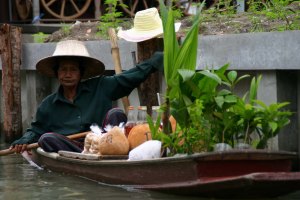 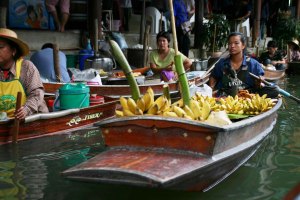 The motor on one of the boats; they also have really long rudders. 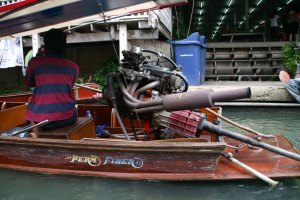 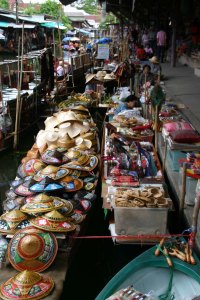 Temple on the way back from the market. 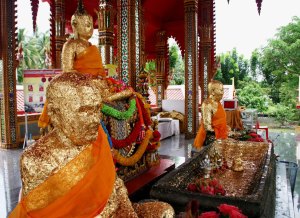 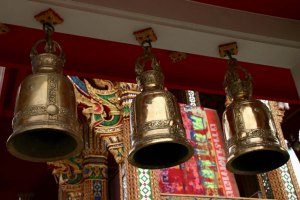 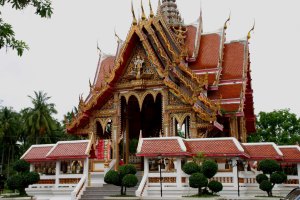 Fish farm; they gave us bags of fish food to throw out to the fish who went in to a major feeding frenzy! 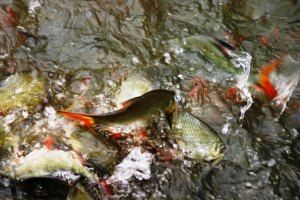 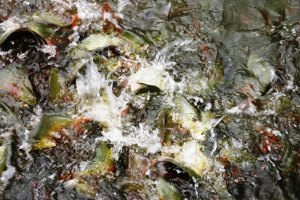 Back at the boat landing we met the car; kindly declined the tacky souvenir plastic plates with our digital photo portraits glued in to the centre and headed off for the Rose Gardens. To be honest if we had known more about this we would have given it a miss. It’s a purpose built tourist area filled with orchids and roses, expensive restaurants, performing elephants and an hour long show we had to endure about Thai culture performed by dancers and Thai kick boxers. Meanwhile back in the car Michael told us about when he was 6 his Dad was a clown and he was his assistant and they worked as Carnies at the circus; his Uncle meanwhile had something to do with the first moon landing and Michael is a distant relative of the Irish Michael Collins. Put it this way – it was way more entertaining than the Thai culture show. 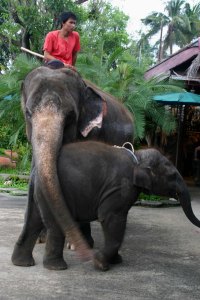 May 23rd – we went to see Indiana Jones with Michael and Georgie at the VIP cinema; can’t get enough of the VIP screenings! Movie was okay – so so. We had to do the usual standing on ceremony for the National anthem and short movie of the King but what was funnier was when it happened randomly outside in the street. Georgie was the first to recognise the anthem being piped out of a tannoy above a hairdressers and all the shoppers in the street suddenly stood still and went completely silent. Michael didn’t realise and carried on wandering about until we got him to stop; visions of him being carted away for treason! In the evening we headed to a local restaurant on the river called Sam So Sen Sin. The food was excellent and we had a great view of the passing gaudy river boats (lit up like Christmas Trees with slogans such as’ We love the King’) and the bridge. The sky was illuminated with flashes of lightning which didn’t seem too ominous until the very moment we left the restaurant …..it absolutely tipped it down. Huddled together under a foot wide overhang wedged between an iron grilled building and a car; the rain sluiced down the street and up to our ankles. We were laughing but getting bloody soaked until an old man shutting up shop loaned us his umbrella. Michael head out into the monsoon downpour and returned with a taxi who we overpaid on purpose for rescuing us.