Skip to content
Dropping behind with the journal by several days – it is difficult to keep up with sporadic internet access when in the middle of the mountains. Anyway we had to get up at 4.30am to get to the Chetumal bus terminal on 22 Sept to catch a 6am bus to Flores in Guatemala. For some reason they wouldn’t sell tickets in advance. It was a Linear Dorada bus, full size but a lot more worn in than the one from Tulum. As we waited to board under the flickering fluorescent lights the terminal started to fill with people getting off incoming buses from all over Mexico; local women dragging huge bags around and men wearing traditional cowboy hats and huge shiny buckle belts. Our bus was almost empty when we pulled out but we knew it would be picking up a lot more people en route to Flores in Guatemala. We were told it would be a 7-8 hour journey but be calculated for longer allowing for central America time which is a bit sporadic. We crossed the border for Belize 20 minutes later our concerns about our unstamped Mexican tourist cards unfounded as they did it for us at the border and only charged us $10 each to keep the cards so we could re-enter within the allocated 180 days since arrival in Mexico. After the immigration formalities were over at the border crossing our bus pulled out again and into Belize, rolling through lush green countryside past dilapidated wooden houses, small bodegas and kids running down the streets in their school uniforms.. The bus driver made frequent stops wherever he saw food but never explained to us as he didn’t speak English; so we sat on and watched as he jumped out to buy another banana or another tamale while we sat hungry and envious on the bus, not daring to venture off in case we got left behind! (picture of me below looking very happy to be in Flores and off the bloody bus!) 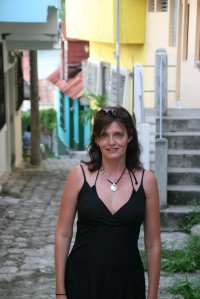 Several hours later we pulled in to Belize city which was a real jolt to the system; it was like nothing I had imagined being so close to Mexico where you just don’t see any black people, here in Belize it was more like Jamaica. An almost unintelligible English in some cases which sounded like patois, other English speaking voices rich with a deep Caribbean accent, tall black police and army officers with beautiful smiling faces all calling hello as they passed our open windows on the bus. It was the day after their independence day (from British rule) and the bus had to pull in and stay for 40 minutes to pick up new passengers; several metres away from the bus terminal as the roads were closed for the marching bands and pickups with sound systems strapped on the back which came over the bridge in the centre of town and wound down the local streets. By 9am the day was heating up, no air-con on the bus which was okay when moving as you got the breeze from open windows, but stagnant on the streets of a noisy and excitable Belize City… we all started to overheat and grumble with hunger as we’d had no breakfast since out 6am start. A nearby unmanned food stand on a tricycle piled high with corn on the cobs looked inviting but no-one evident to buy to from. A sulky but sultry looking black youth heavily tattooed with faded skulls and Guadalupe style decoration leant against a wall in the shade of The Joy Frozen Blends and Treats food shop – ‘your frozen chocolate the way you like it’ tantalized but again was closed.
After loading up with several more passengers including a young English guy called Hadley, the bus pulled out again and a few hours later we arrived at the Guatemalan border. We had to pay $30 Belizean dollars (approx £8) to leave Belize at the Belizean immigration desk; I wrote it off as a road tax since we hadn’t even got off the bus there, and then another $4 US dollars to cross the border of Guatemala at their immigration desk across the parking area in another building. Exit stamped for Belize and entry stamped for Guatemala we got on the bus again and head for Flores just another hour or so along the road.
Arriving in St Elena, part of Flores but over the bridge from the old part of town, we had to swap on to a small collective mini-bus which could negotiate the small winding streets and cobble stones of old Flores. The collective guys drove us around helping us to find places to stay. Hadley checked in to shared dorm in a hostel for £1.50 a night and along the same street we went for the upmarket option at £9 each at Casa Amelia with a beautiful big double room and immaculate new bathroom, cable TV and hot water shower with stunning views over a lake which folded around a small island. 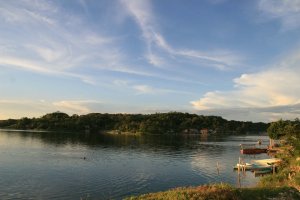 23rd Sept: It was great to wake up and look out over the lake to see small boats passing by and local people swimming. We met up with Hadley next door for breakfast with a table on the terrace overlooking the lake and after filling up on huevos (eggs) we walked over the bridge to the busier part of town St Elena to get some quetzals from the atms and wander through the sprawled dirty local food market washed out with heavy overnight rain. Hadley headed back a bit earlier and Dave and I went back over to old Flores later in a tiny noisy red tuk-tuk that roared over the bridge and bumped and rolled over the cobbles at some speed for such a small unstable vehicle. Stopping at San Juan travel we booked the 3am sunrise tour for Tikal Mayan ruins the next day and our bus to Semuc Champey for the day after; arranging to be on the same buses as Hadley so we could hook up.

24th Sept: We had a very early night to prepare us for a 2.30am wake up to get the 3am tour bus to Tikal. Sitting on 2 plastic chairs in the dark empty streets at 2.50am we watched flies and moths dance in the sodium lights. 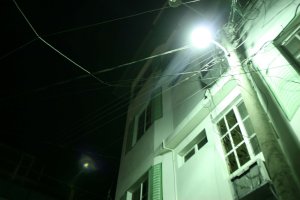 The old US style school bus picked us up at 3.20am after collecting other people en route. Hadley dozed with his I-pod earphones but acknowledged us as we found 2 seats together and opened the windows wide to get some fresh air in to try and wake us up.

At Tikal park we were shepherded in by our fluent English speaking guide Lewis who sounded like he had learnt English via Louisiana. It was pitch black and stupidly we had forgotten our torches so Hadley and Lewis lit the way and we followed the rest of the group in to the darkness, stumbling over loose rocks and tree roots. Howler monkeys roared to life from the rain forest canopy, their ferocious barking howls echoing in the blackness; eerie but exhilarating. As we rounded a bend in the path Lewis shone his light in to the trees and illuminated a huge Mayan temple which loomed towering in the dark; it was stunning. As night started to turn to dawn we arrived at the main Mayan temple which we climbed to the top of via a long wooden staircase where we all took a seat at the summit. Thick mists swirled over the rain forest as parrots and toucans flitted through he trees calling out to each other.

Sunrise was unfortunately blanketed by the mist but it was still magical watching the mist part to reveal a row of three temples strategically poking out of the tree canopy only to be shrouded and hidden again as the mists drifted back in to envelop them. The experience was very ethereal and humbling as you imagined the strength and mysticism of the Mayan people who built these incredible structures to be closer to the sun and to use astronomy to predict the future. 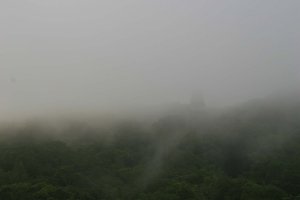 The temple ruins of Tikal. 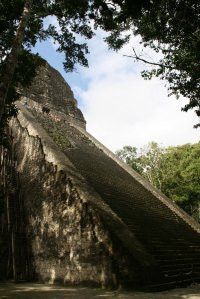 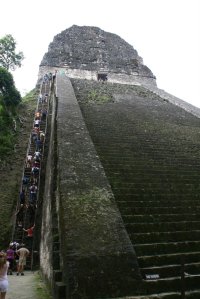 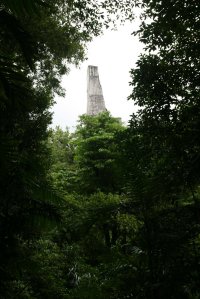 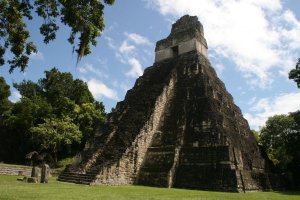 After climbing back down we wandered the rest of the site at Tikal in the blazing sun, a local guide found a tarantula hiding in his nest at the base of a tree and I volunteered to have it put on my arm where much to the amusement of the rest of the group the tarantula squirted out spider shit along my forearm.

…..oh how they laughed. Is tarantula shit poisonous? 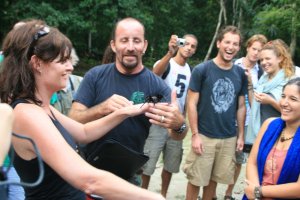 The guide flipped it over and showed us its strong teeth where it uses its venom to kill its small prey (ineffective to humans) and the red hairs which cause an allergic reaction if shed on the skin; all of which was explained AFTER I had held it. We eventually headed back to Flores on an 11am bus; tired, hungry but high on the morning’s experiences. 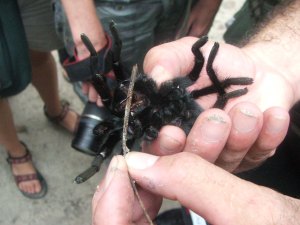 A scorpion spider, minus 1 leg by the looks of it.

Spider waiting in his web. They have bloody big spiders in the rain forests and jungles here. 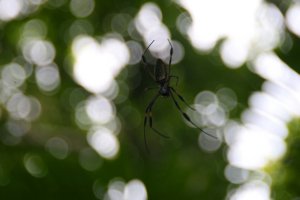 A member of the racoon family; a white- nosed Coati; also known as snookum bears! 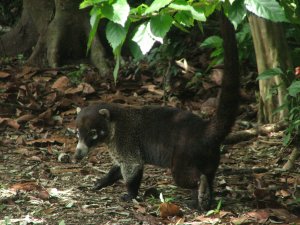 I love the signs, everywhere has the requisite no guns sign somewhere. Loads of the locals carry guns here, it’s incredible. 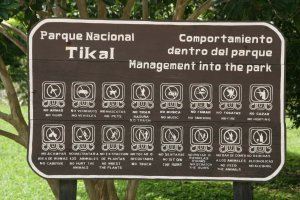 After a lunch with Hadley and some other people from the group we went our separate ways to chill out for the rest of the day, eat an early dinner where we met 2 Americans travelling with their own truck across central America piled up with camping gear and unfettered by bus or plane schedules; and then an early night to catch up on some well earned sleep. 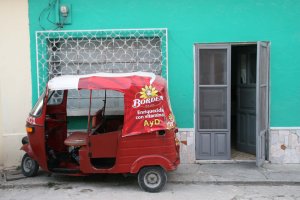 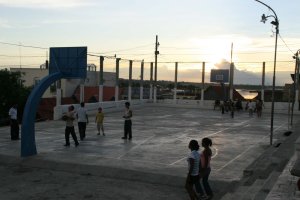