Skip to content
On the 4th October we left rainy Guatemala and flew out of Central America and on towards South America to Lima, the capital city of Peru. We had to change planes at Costa Rica . Whilst waiting for the flight we watched as they fuelled and loaded the plane and set up the passenger walkway to the plane door…. 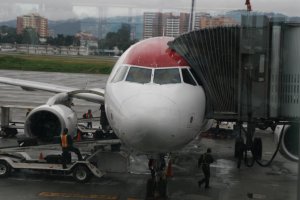 …and watched whilst the pilots took turns having their photos taken in front of the engines! 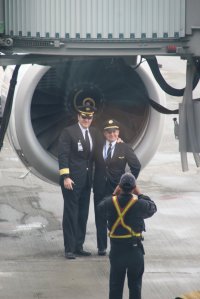 The drive from Lima airport in to the Miraflores region of Lima city was miserable. I have never experienced so much smog and pollution this close up. We drove along the sea front which looked like a huge building site; dirty cliffs reaching down to a dirty grey looking sea. The city outskirts were ramshackle and poor with dilapidated one storey basic cement buildings smattered with broken windows and inhabited by broken lives. Everyone looked worn, shifty and downtrodden and no-one smiled. As we approached Miraflores, a more affluent neighbourhood of Lima, buildings became higher and an obvious city centre started to take shape. We couldn’t get in to our preferred cheaper lodging for the night so instead stayed in an $80 room at Habitat, a new contemporary hotel which looked like it had been erected in a hurry and would collapse at the first tremble of an earthquake. None of the doors fitted the frames, the windows offered no insulation from noise and hung loose in their frames and the corridors echoed stark and white with nothing to absorb the sound of our echoing footsteps and the doors which banged open and shut all night long. At least we had TV and a comfy bed. We did manage to get in to the Hostal El Patio for our second night where we were greeted by friendly staff, chirping canaries, a flower filled patio and the owners ancient dog. A lot cheaper, a lot simpler, but a lot more character for only $45 a night. We could only get a room with 2 single beds and after wandering around the city for something to eat and finding a local tropical flower show in the square, we returned to snuggle down under our blue gingham bedspreads and alpaca blankets. 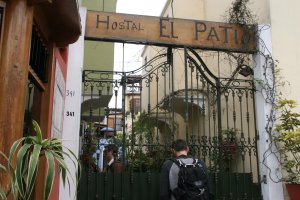 I wasn’t very enamored with Lima and the hassling street kids who just got a bit too close on occasion did little to enhance its crime ridden reputation. Miraflores was okay but I find everything rather jaded. There is however strong evidence of a great music and arts scene and we found a fantastic little arts café called La Maquina filled with inspiring art work by local artists …. 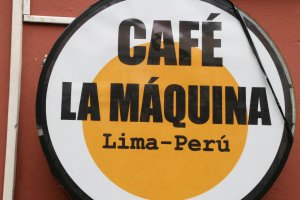 …and a great wall to wall poster of Lou Reed and Bowie with my favourite boy Iggy! 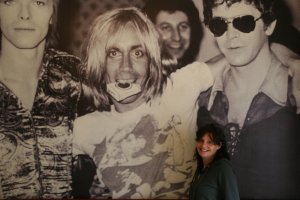 I wanted to buy this painting below but it had already sold for $600; painted by an up and coming local artist who we met in the cafe the following morning when we dropped in to take photos. 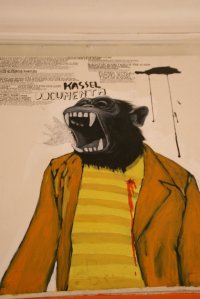 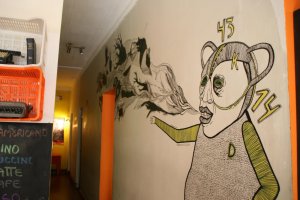 We talked for a while with Saito who works in the cafe and who’s in a hard core punk band and has just been producing 2 other bands. His Grandparents were from Japan and moved as fishermen to Peru many years ago. We swapped musical tastes and talked about the local art scene. One of the rooms in the cafe is a gallery for local artists. 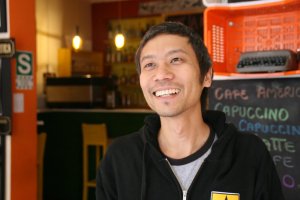 I want to rip off this coffee table idea for our kitchen table when we get back. 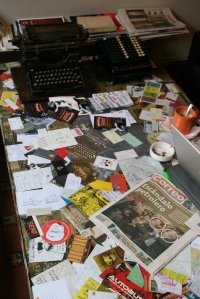 Light switch graphics in a nearby shop. 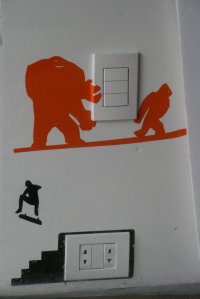 A funky basement boho shop near the cafe. 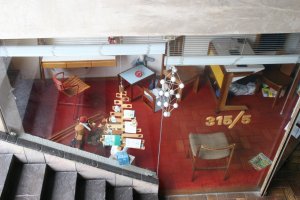 Peru is famous for its seafood and we did enjoy a good meal of seabass in one of the local restaurants very close to the hostel. But apart from the coffee shop, Lima left me cold…I couldn’t wait to leave the smog bound city and head to Cusco in the mountains. Perhaps if we’d had more time to see some gigs, meet more people like Saito and go to some art shows in Lima we would have warmed to it more …. there’s definitely a strong underground arts vibe going on that we just weren’t in town long enough to tap into and I can imagine that in future Lima and especially Miraflores will be on the up. It’s a place to re-visit in the future I feel.