Sunday 19th October Dave and I went to the big Boca vs River game at the River stadium in Buenos Aires. The game itself was pretty poor with only one goal to Boca – which was kind of cool because there were 60,000 River fans and only around 2,000 Boca fans at the River stadium. We had to go in a guided group for our safety and had to sit in the River stands…so I wore a River hat and got in to it but we couldn’t exactly chant because we don’t know enough insults in Spanish. The guy above sitting next to Dave is a local headmaster….he taught us the meaning of a few of them and pointed out when all the really hard River fans came in to the stadium; delayed as it takes the police so long to frisk them all. 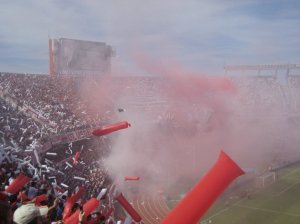 They control the ticket sales to stop the carnage from the fighting after the game as Boca and River are huge rivals and infamous for fighting, amongst the fans and the actual players. It was a shame it hadn’t been a faster paced game with a few more goals….it would have been good to see 60,000 River fans go bonkers if their team had played well enough to score, but River were pretty shoddy on the day. Boca fared better but also weren’t exactly on fire. However, the fans leading up to kick off were definitely on fire and went mental; setting off smoke bombs, waving huge flags, large groups of drummers, streamers, tic-a-tape showers over the crowd, firemen on standby to hose everyone down if it got out of control.

The River stands behind the goal where all the hard core fans are.

All of these photos were taken by an American couple at the game on the same tour with us as I didn’t want to take my big camera and chance it getting smashed or nicked….so a massive thanks to Zee and Joy for making the effort and emailing all of these to me the next day. Hope you had a good flight guys!! 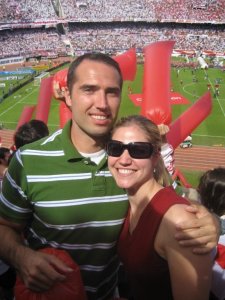 Boca win the game 1-0 and get mobbed by the press photographers. No-one else dare run on the pitch and mob them becasue they don’t want to run the gauntlet past the riot dogs patrolling the edge of the pitch.

We got dropped back at the hotel after the game in time to meet up with my old boss Jonathan from Caroline Export days 20 years ago, who was with his wife Clare, both on a business trip to Uruguay and passing through Buenos Aires en route! We ate great steaks in El Desnivel in San Telmo along with Natasha who was also staying at Babel Hotel. The waiters including our favourite Elvio, are River fans so their form was a bit lower than usual that night as I think they were all crying in to their mate at the game result.