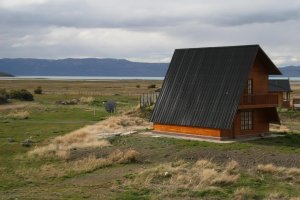 I love the El Calafate scenery, it has definitely been a highlight for me here in Patagonia, Argentina. The landscapes are massive and wild and ever shifting as the light changes over them. The skies are vast, the wildlife bountiful and accessible, the birds are vocal and the Perito Moreno Glacier was absolutely staggering….but we will come to that in the next blog! The wind sweeps across the open steppes and whirls impulsive dust storms in to the open brush land; you can literally taste Patagonia in the grit lining your gums. 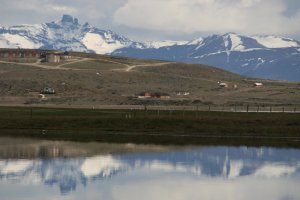 These views are all within easy walking distance of the hotel or taken from directly outside the hotel where we have been staying 1 kilometre out of the town centre. The lake is home to a large flock of pink flamingoes and a huge amount of other local birds. It is a bird watchers paradise and I regret not having binoculars with me simply due to the variety of birds to be seen around here. The hotel told us we could cross the fencing boundary line to go to see the lake and surrounding ponds, so we hunted for a natural break to get through as it was way too high to vault over, my vaulting days being pretty much over! 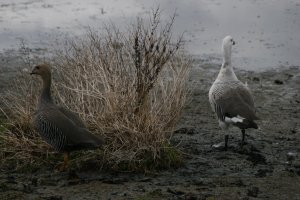 This bird below was really aggressive, you find them in pairs and they make a hell of a racket when they see you. I think they are called Tero’s. One of them actually attempted to dive bomb Dave which would have been a good Hitchcock YouTube moment had I recorded it! I suppose all of City Boy Dave’s claims about the great outdoors not being ‘his thing’ can now be justified since he has been terrorised by the wildlife!

Reflections on the lake. 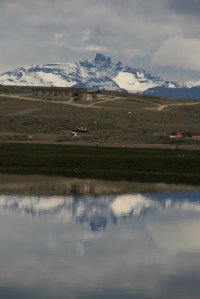 I think the rugged outdoors thing kind of suits him really. 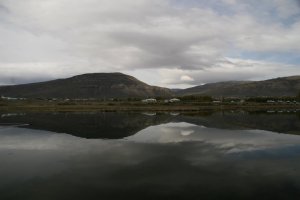 Apparently this is a Black Headed Ibis – not a very good photo as I couldn’t get close enough but the noise they were making was incredible. They were all in the trees not far from the hotel.

Close to the hotel are several small holdings with horses and rusting cars and remnants of old wagon wheels. 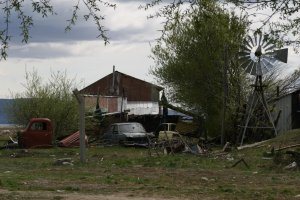 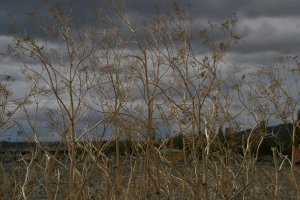 One man and his dogs, pretty funny as Dave isn’t a dog fan at all but wherever you walk in this town there’s always a dog roaming around who will pick up your trail and follow you for a few blocks, especially if you encourage them as I am likely to do! Dogs have free roam here, Patagonians literally open their doors each morning and let them out to roam and let them back in when they come back home at the end of the day. There are hundreds of dogs wandering around town, most with collars on and all well fed and well cared for. For me it’s like living in a Disney movie…I love dogs. 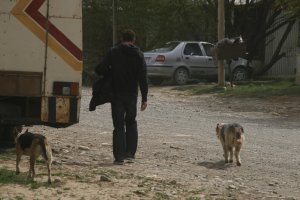 The hotel just out of town where we have been staying Hosteria Cauquenes de Nimez…a nice change again after the hostel in Puerto Madryn but pretty pricey for at £50 a night. We are now back in a hsotel again but hostel’s in El Calafate cost over £35 a night for a double room with private bathroom. It’s an expensive area for travelling in. The hotel was great though and the views and location amazing.

Argentina’s downside is the food because apart from the amazing steak that everyone quite rightly raves about, it is a relentless onslaught at every turn of small rolled slices of ham and cheese and over sweet croissants and over cheesed pizzas with oily bases. The prices in El Calafate are also pretty staggering compared with the rest of South America so far. Dave’s pizza cost a whopping 47 pesos compared to 22 pesos anywhere else in Argentina. It comes as a shock after some of the other countries we have travelled to. But I can forgive the diet for the amazing amount of wildlife we have seen and the landscapes we have breathed the air and dust and sand in.