Skip to content
There are hundreds of cave systems scattered around Borneo  and close to the old gold mining town of Bau are two accessible and spectacular caves; The Fairy Cave (pictures below) and The Wind Cave. We couldn’t take photos inside The Wind Cave as it was absolutely pitch black. Slippery wooden boardwalks lead you through the unlit cave system which is network of underground streams on the banks of the Batang Kayan. Using really crappy dim local torches we dragged poor William our taxi driver in to the caves with us; chittering fruit bats swooping around us and nesting swifts clinging to the sides of the cave walls. Their nests are highly prized for the rare and expensive Bird Nest Soup….made from bird saliva!  The Fairy Cave is 5km further south and much higher up.  Fortunately the government has replaced the treacherous old steps with a huge new concrete structure which you climb up to access the amazing elevated cave chamber 30 metres above the ground in the side of the limestone mountain cliff.

Generations of Chinese have come to make offerings in these caves; leaving burning incense sticks at the foot of huge water formed stalactites that have dripped down from the cave roof. 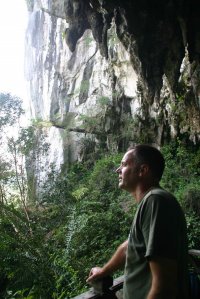 Once inside the cave you can explore by following narrow concrete paths- some of which are slippery from dripping water.  Once you wander off the paths and away from the cave mouth it becomes pitch black but goes much deeper into vast grottos and cave systems deep in the mountain.  It’s absolutely fantastic and also quite intimidating when you walk off the path in to dark towards some huge yawning expanse of inky blackness into which you can’t see an end. Your imagination can definitely run riot in here and if you have watched too many horror movies you are best giving it a miss!
The shadow of Dave pointing down in to the main chamber we had just climbed up from.

Close to the nearby town of Bau is a large lake which fills an old gold mining area. Several years ago many local people kept reporting suspicious sightings of a lake monster and consequently the government drained the lake; not surprisingly finding it empty…until I got there – ha ha ha.