Skip to content
29th September: Call us mad (we must be judging by today’s decision) but we thought it would be an excellent idea to join a small tour of people off to climb the only active volcano in the area, Volcan Pacaya around a 90 minute drive outside of Antigua. Hadley, Christopher and Julia joined us on a Yellow House tour, 11 of us in total and for once all comfortably seated in a relatively new and decent sized mini-bus. Things were boding well; the sun was shining, it was comfortably hot outside and for the first day in what seemed an age we were all dry, damp free and wearing our still tumble warmed laundry. An hour and a half later I was sitting on a horse in the pouring rain pathetically equipped in my cagoule and cheap throw away plastic rain cape, trying to make out the trail to the volcano through a thick sulphurous mist.

Dave buying his raincape – all the shops have iron bars in them for security. 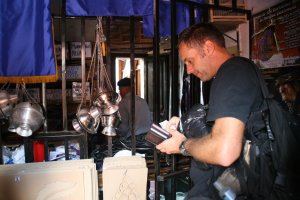 Dave and the boys decided to go the 90 minute trek straight up on foot. At least we were wearing rain capes, trainers and had bought food, water and torches with us. An Australian guy was in a t-shirt and flip flops with no torch. Local kids swarmed around us as soon as the mini-bus doors slid open blocking our way off the bus selling long sticks whittled smooth from branches for 5 quetzals each. 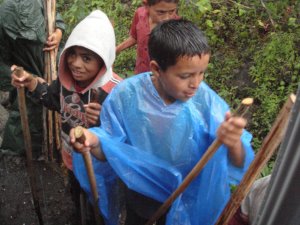 Dave set off on foot in his long black rain cape and stick looking like the Grim Reaper disappearing in to the mist. Along with some Israeli travellers I had opted for what I thought the easier option of covering at least 40 minutes of the trail by horse; with Guatemalan saddle and blankets and my horse riding guide Ronald leading the way by foot and carrying my stick. Only 10 minutes in and on an impossibly narrow slippery trail, my horse stumbling up and down a switchback of loose mud and stones, scraping by trees and barbed wire fences, I realised that hiking by foot might have been less unnerving. Luckily I felt confident in my horse unlike some of the other riders who looked rigid with fear. I was also inexplicably confident in my riding skills despite not having been on a full sized horse since the aged of 11 and not having a riding hat or even clear visibility ahead. Going up was marginally easier though I say that loosely, as you could negotiate low overhead branches and the steep trail by leaning forward. At points where the trail ran down at a ridiculously steep angle, the horse sliding over slippery tree roots and rocks, I had to lean back to avoid being thrown head first in to the tangle of forest. It was however exhilarating and I imagined myself as a cowboy; a fat cigar and poncho and I would have been riding in to a Magnificent 7 fantasy… but we were more like the scared shitless Mortified 7 as our guides pulled us onwards regardless to legs scraping on trees and whether we were even capable of remaining saddle bound, their scrappy dog running ahead then running back under the horses to hurry them on. 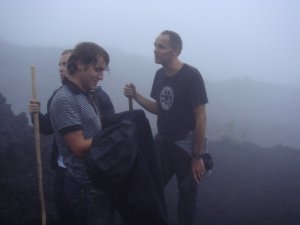 After what seemed an age we joined up with the walking group knackered from their climb and soaking wet. I dismounted unhooking my feet from the beautifully hand tooled leather stirrups, took up my stick and arranged for Ronald to wait for me for the horse ride down. Our walking guide Hector now urged us ahead. Visibility was worse now we were so much higher. The white sulphurous mist wrapped around us and we could only see a few feet ahead as one shrouded member of the group after another climbed over blackened volcanic ridges and disappeared. The mist soaked us thoroughly, clothes and rain macs plastered to skin as we laboured and sweated upwards trying to gain footholds in loose volcanic slag as the rain moved in and turned the trail into a slick black slide with a drop to one side into white nothingness, any view completely obscured by mist.

Ronald my guide with my trusty sure-footed steed. 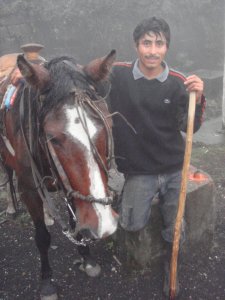 I don’t know how high up we were. Pacaya Volcano is recorded at 2,552 metres but I knew we wouldn’t be going all the way to the top. It’s also the only active volcano in the region and being the one that attracts the most tourists also attracts the most bandits. If bandits could be arsed to come all this way up in these appalling conditions and then stumble upon us by accident by groping their way torch-less through thick swirling mists to rob us of a couple of pocket sized digital cameras and bags of marshmallows, then bloody good luck to them. I put their odds as marginally lower than me making it down in one piece on the horse later. After 20-30 minutes trekking and Dave saying how long does it take to climb an hour and a half up a volcano (I am sure he was delirious at this point and dreaming of being at home with his widescreen TV and PSP) we reached our highest point which must have been over 2,000 metres. We were finally and gob-smackingly rewarded. There in front of was a very active and moving lava river burning molten fiery red through the volcanic crusts, breaking away at one end to tumble flaming over the edge. Great big cracking chunks of crusted fireballs tumbling over and disappearing into thick white mist. It’s a stunning sight and very surreal, standing soaking wet only feet away with your face burning from the intense heat of the lava. 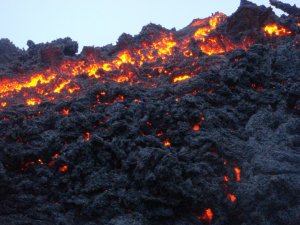 As the rain moved in it sizzled and spat as it danced off the lava, powerless to numb the furnace of several layers of fire rumbling directly below our feet. The twisted gnarled black pumice crust we stood on steamed and heated the soles of our shoes. Realising the danger of how close we were to something so unpredictably volatile…we ripped open our bags of marshmallows and toasted them over the slow running river of burning hot lava. 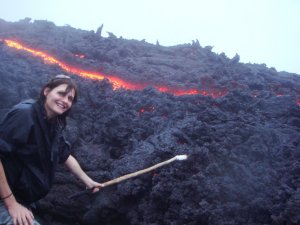 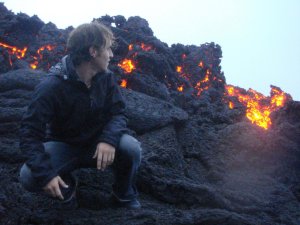 There goes the Grim Reaper.

Our descent was grim as we tried to gain purchase with our sticks in the loose volcanic slag and slid rather than hiked down the side of the volcano for 30 minutes back to the start of the trail. The rain which must previously have only been teasing us, now threw it down in torrents and the sun had gone down plunging the volcano into blackness. As the loose slag and volcanic rock petered out it met the start of the muddy trail. The hikers set off on a treacherously slippery hike down and I mounted my horse and headed off on the separate but equally perilous horse trail with one other rider and our guides leading us in to the forest. I realised my guide didn’t even have a light and he and the horse stumbled around the trail falling over rocks and walking into trees before borrowing the LED light in my pocket. I was cloaked head to foot in a thick yellow rubber horse riders rain cape which came down and spread out over the horse’s back and saddle and kept me relatively warm and dry. Trying to avoid being whipped off the horse by overhead branches or having my legs crushed as we squeezed and stumbled down through narrow gaps in the trees, I helped the guide to encourage the un-nerved horse to keep moving forward and concentrated as I had never done on anything before. A couple of times my feet were forced out of the stirrups as we scraped around a tree and I pulled the horse up calling ‘Uno momento’ to the guide to place my feet back in the stirrups again, nudging the horse forward to stumble on. We reached one densely packed thicket of trees and it suddenly dawned on me that the other rider, a young Israeli girl who was supposed to be following behind, had not been present for some time and that we were also obviously lost and had strayed off the trail. Ronald obviously realised this as I recognised some Spanish obscenities being muttered in the dark in front of me and saw my light bouncing around as it flashed off the trees. I felt strangely calm and had complete confidence in Ronald as he obviously did this trek regularly even though he came pathetically equipped without raincoat and torch for the descent and was borrowing mine – but he was wearing a very sturdy pair of wellies….and how can you possibly not trust someone in wellington boots? Some minutes later after asking me where I came from and why didn’t I have babies (was this a test to see if I deserved to be taken back?) we were back on the trail and eventually could make out the lights of the small mountain town where we had first been dropped off by the mini bus. I got back about 10 minutes before the walkers feeling quite smug in my giant yellow rubber cape as I watched them straggle in drenched and covered in mud. The kids pounced on us immediately asking for our sticks, for our rain capes, our torches, anything they could get and we all fumbled around foolishly checking our pockets were zipped up and the contents safe. I gave my stick to one of the boys after failing to find the young girl I bought it from knowing that they would be on sale again the next day to the next bunch of naive volcano climbers who would arrive on the earlier 6am tour. The kids have found a pretty lucrative market for themselves in hiring out sturdy whittled pieces of wood, and good on them because we couldn’t have completed the trail without a trusty stick.
We made good progress back to Antigua in the minibus despite heavy rain and misted van windows, I don’t know how the driver could see where we were going but after a couple of near misses we were safely back in our rooms and leaping gratefully in to piping hot showers. Dave and I were asleep by ten, totally exhausted from the day, foolishly emboldened by the adventure and eternally grateful to our guides for an incredible one off experience.