An easy short flight from London we’d come for the famed graffiti tours that walk you all over the city.  It was bitingly cold and snow on the ground but somehow that added to the atmosphere.  So much has already been written about Berlin, the former capital of East Germany before the fall of the Berlin Wall in 1989, German reunification which followed in 1989. ..making Berlin the new capital of all of Germany.   The city is rich in historical sites from the  Brandenburg Gate to the infamous Berlin Wall some of which still remains, now covered in graffiti.  But we weren’t here to learn more about the Weimar Republic and the Third Reich, we wanted to see what Berlin is about right now…now that the artists are free to express themselves openly… to see a city reborn and reimagined.  We stayed at the fabulously inventive Michelberger Hotel, an independent hotel built in a former factory building a walk away from the East Side Gallery, the official name given to the longest stretch of Berlin Wall still standing.  The hotel feels like a cooperative between like-minded artistic rebel creatives; part set design, part upcycled liveable gallery space and all totally hip.  Lampshades are made from shredded magazine pages, cuckoo clocks hang together on bare plaster walls…our bedroom had a gold painted four poster bed, a sunken bath, basic wooden floors nailed down and sprayed gold and a gold mirror tiled bathroom.  Yup, we’d selected the gold room.  There was a library room with books attached to the walls and rooms with bunk beds and raised loft style beds.  The lounge areas and bar are just as fun and even better, the hotel is a pick up point for our planned graffiti tour. 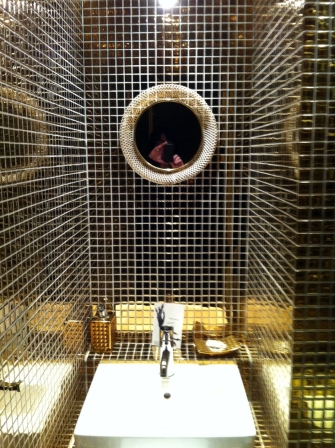 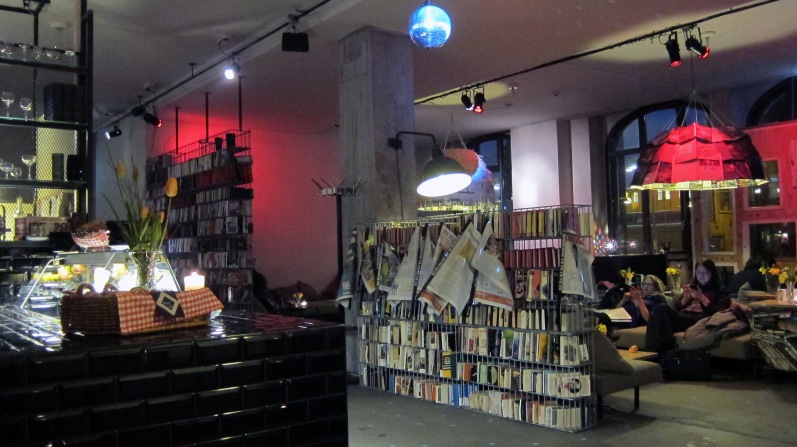 Only here for a weekend we wanted to see as much of the street art as we could and I had some favourite artists that I was hoping to see murals of; Belgian graffiti and street muralist ROA and Portuguese street artist Vhils.  The following day at 12 noon we were met by the graffiti tour leader at the Michelberger Hotel reception.  She was friendly, an artist herself and had a small group of around 8 people.  Run on donations rather than a paid fee, our walking tour lasted 4 hours…and we saw some spectacular Berlin street art. 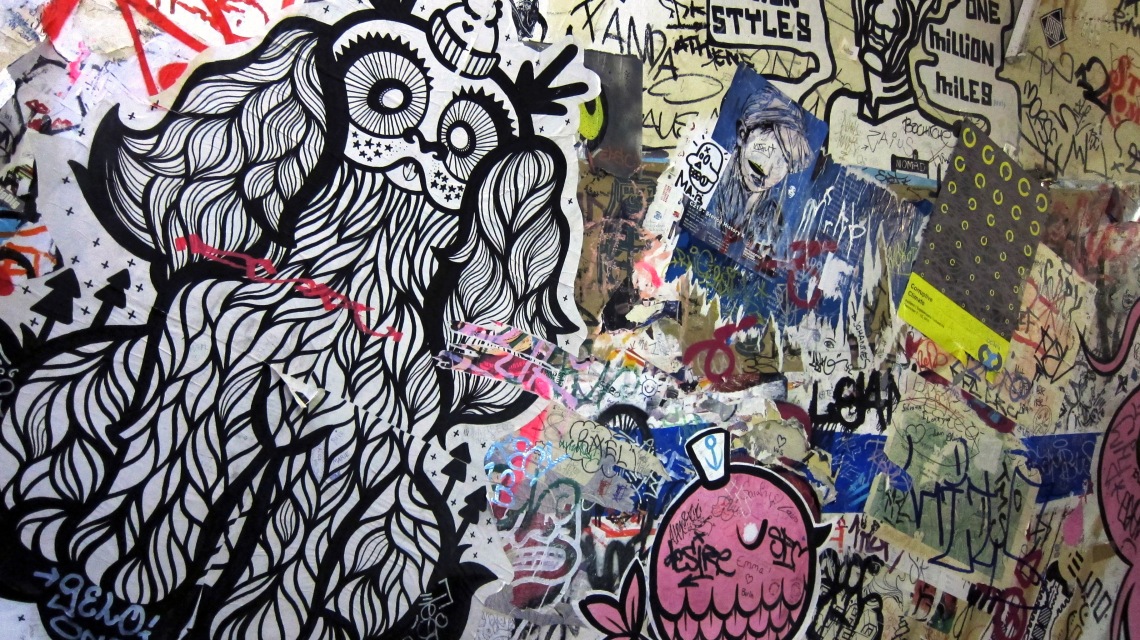 I couldn’t name the areas or streets we took because we were too busy concentrating on what the guide was talking to us about as she walked us all over the city, down alleyways and main streets and in to the different neighbourhoods.  There is so much talent on display that it’s overwhelming, street art is everywhere and on a large scale including a piece by ROA whose work is usually about animals; dead or alive, their inner circulatory systems exposed, skeletons, veins….there is a lot of beauty in his macabre choices.  Really glad I got to see this. 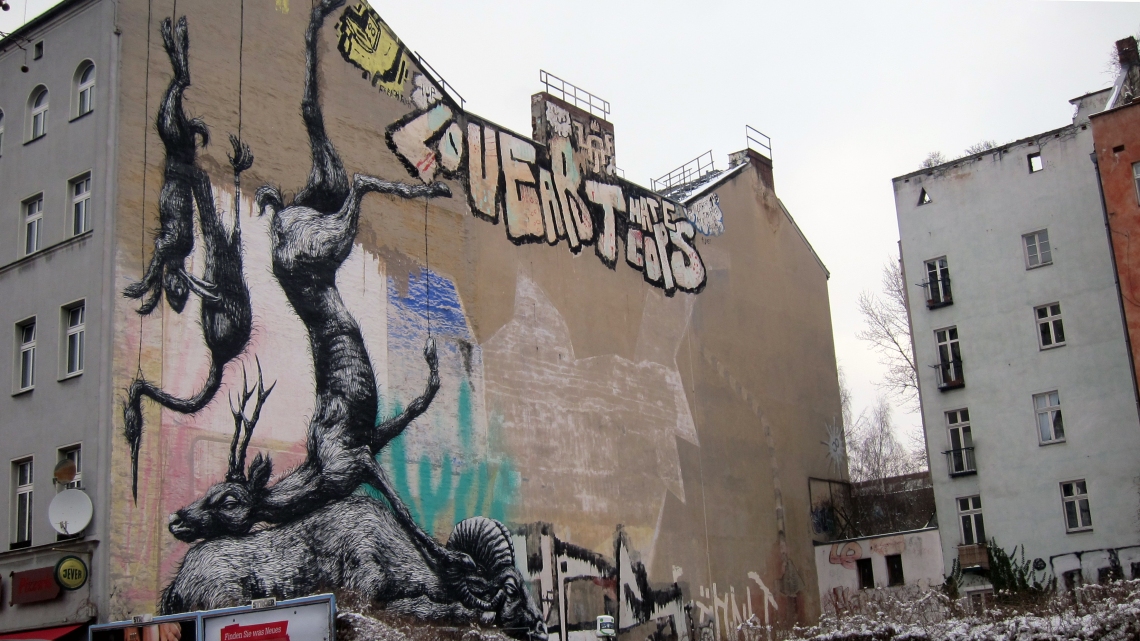 The guide walked us in to art workshops and a small gallery.  She pointed out a large art house squat in one of the neighbourhoods which was several stories high with homemade signs and banners hanging from the windows.  Apparently a lot of them are under threat of being closed; come back in 10 years and I’ll be amazed if a developer hasn’t taken it over and made it in to so called ‘luxury’ apartments.  It’s sad that the artists get priced out when it is usually their presence that initiates the interest in a neighbourhood.

I particularly loved these pieces made from collaged paper below; hanging like African tribal cloth in beautiful colours.  I didn’t get the artist’s name which I really regret because I’d love to see more of their work. 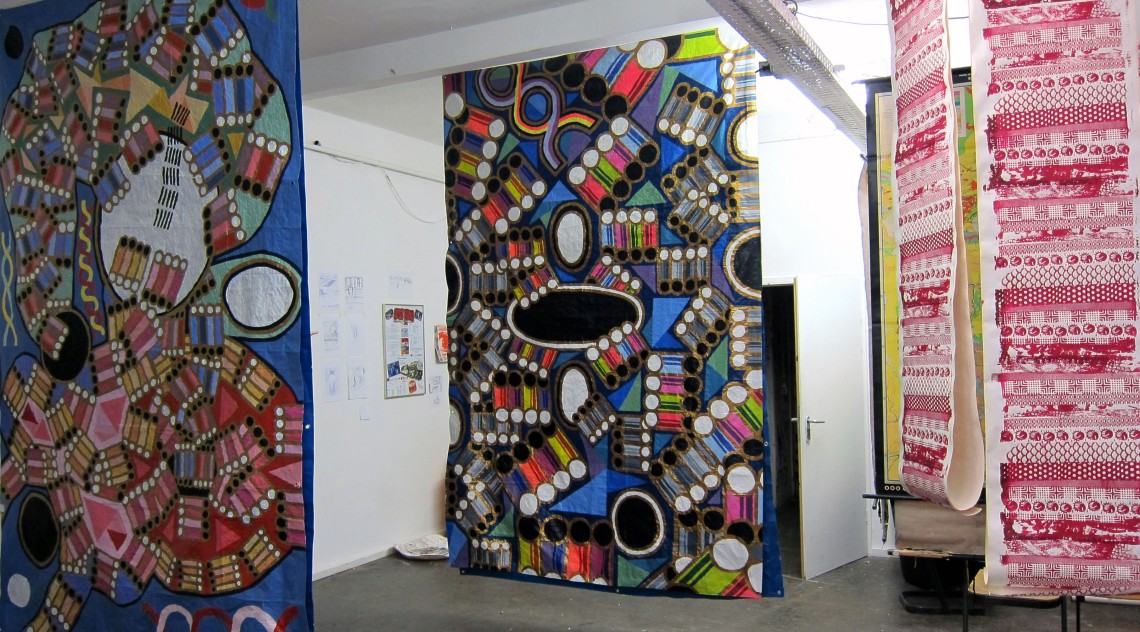 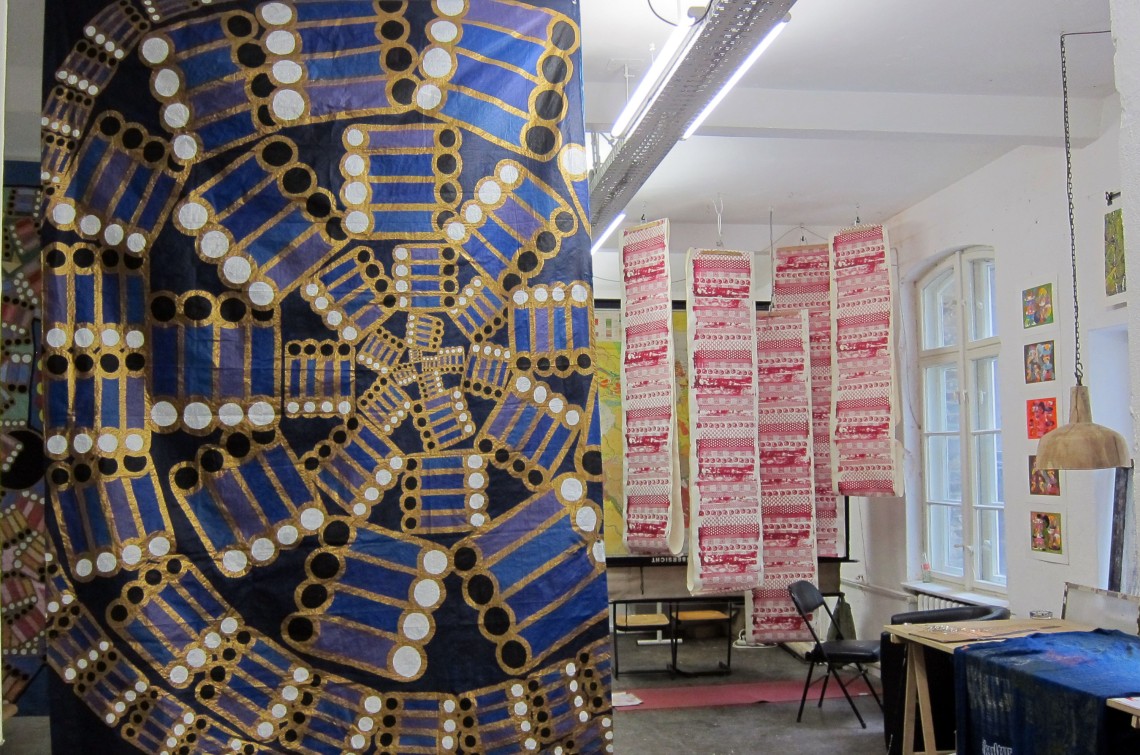 Despite the freezing cold temperatures we felt that we saw a lot of the city and must have covered several miles.  Calling it a day at the end of the tour, we ate at an Asian restaurant in one of the neighbourhoods before heading back to the hotel for a drink in the bar.   Next day we hit the streets again but it felt even colder and the snow was turning  to slush ….which was leaking in to my boots! 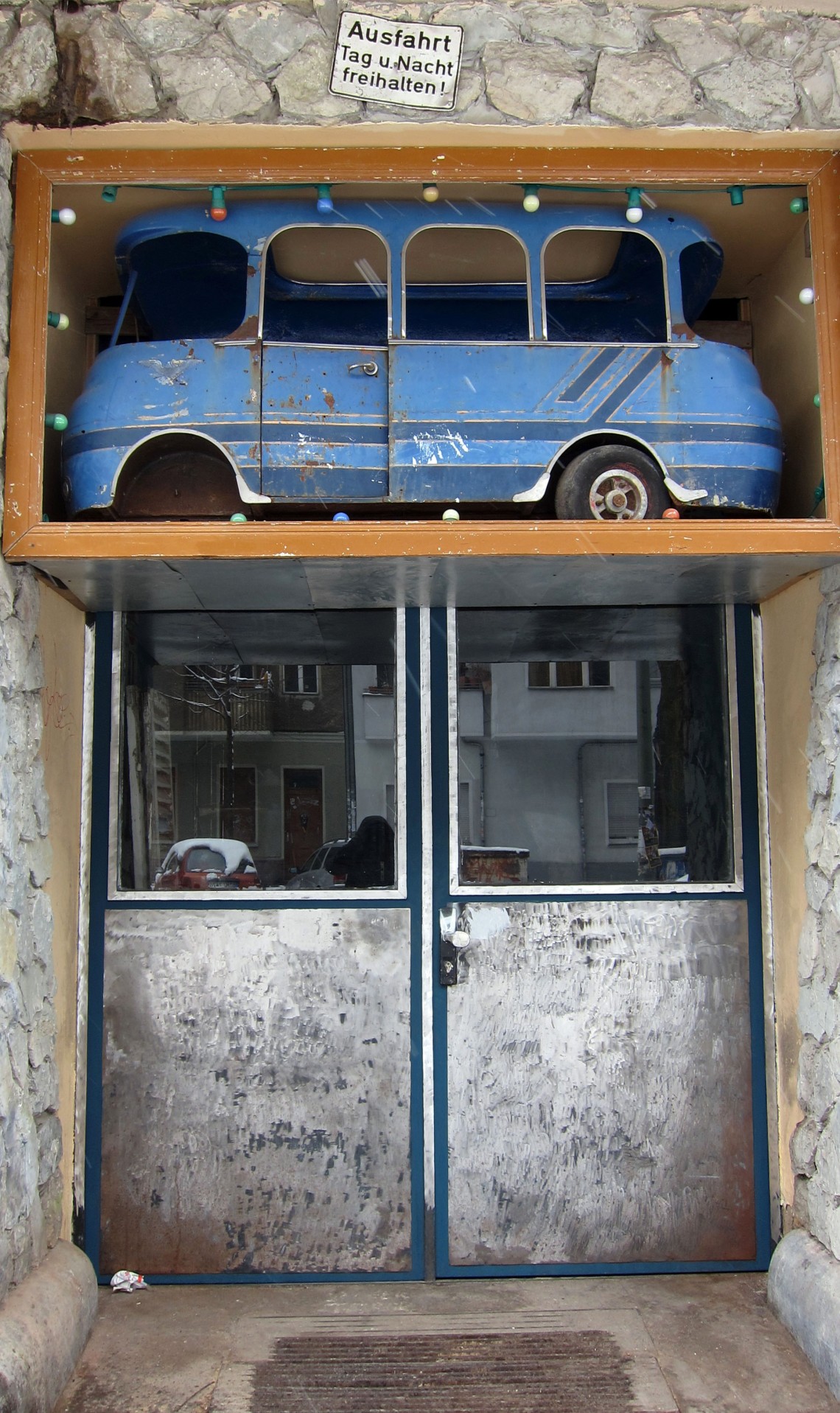 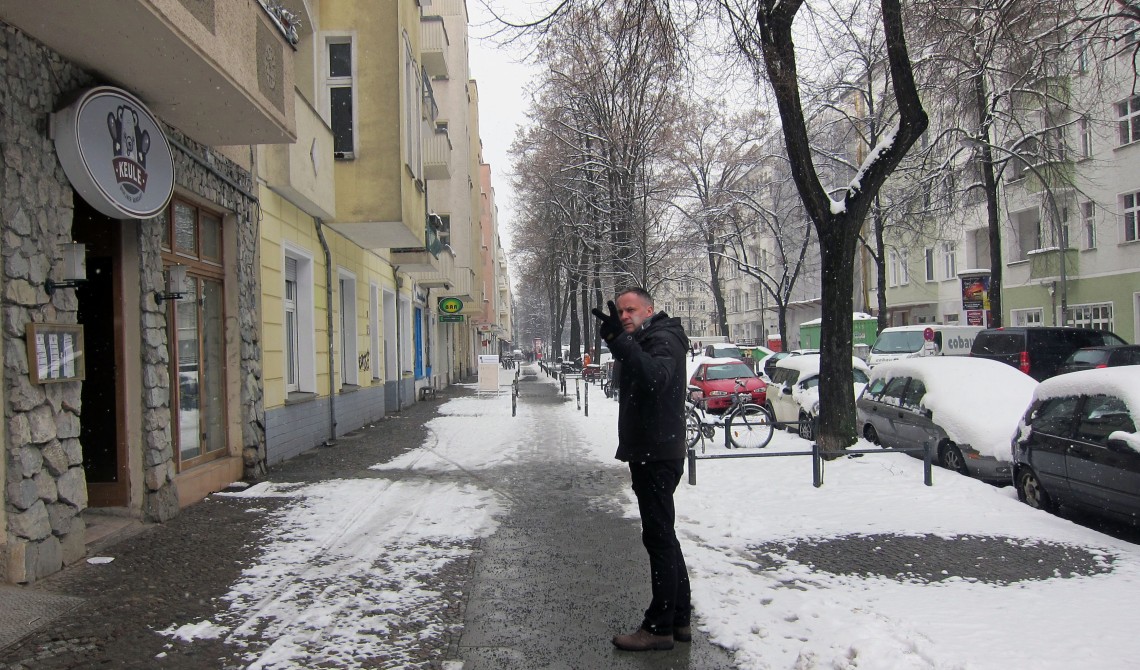 Grabbing a couple of plastic bags from a grocery store to line them with we decided to call it quits on hanging around outdoors looking at landmarks and headed instead to the Berlin Museum of Film and Television (Deutsche Kinemathek).   Innovatively designed with mind bending rooms of mirrors and giant TVS, it was showing a special exhibition on Martin Scorsese with infamous scenes from his movies shown on wrap around surround screens. https://www.deutsche-kinemathek.de/en

The obligatory photograph, propping up a section of the Berlin Wall. We got off the train near the hotel and ran over to look at it before getting back inside to defrost.

Blimey – it’s just too damned cold.  But it’s the last day and we’d been tipped off about the train yards for even more graffiti.  Absolutely no-one there but us and it was worth enduring the temperatures for the fantastic murals; my favourites below. 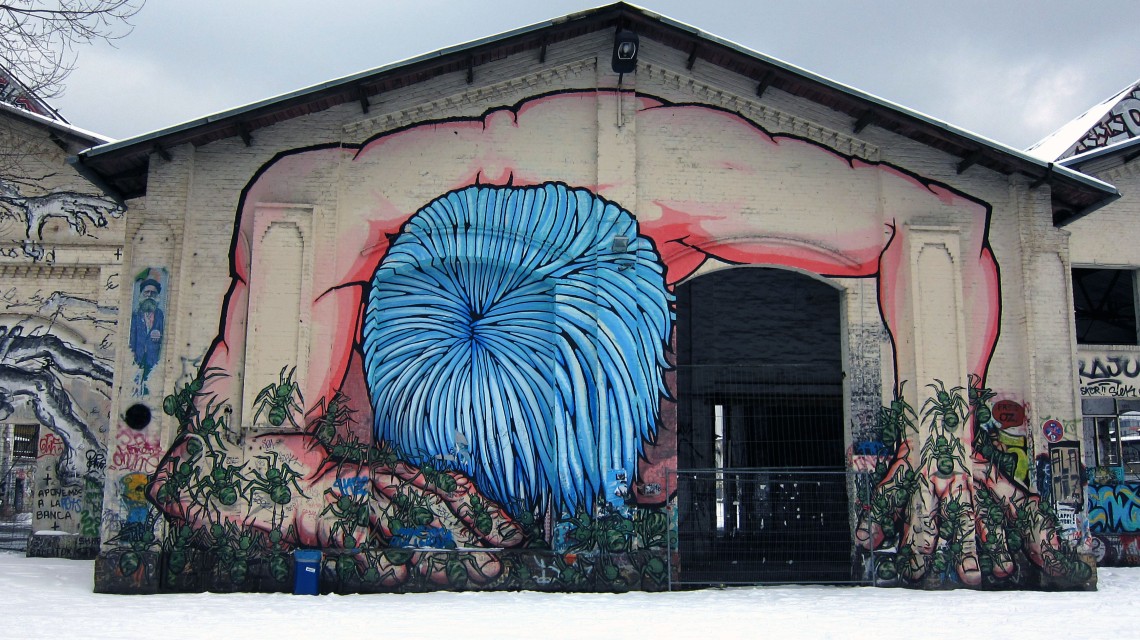 And walking around a corner we found a large portrait by Vhils behind a steel fence, done in his bas-relief method or “creative destruction”; chipped and drilled out of the surface of the wall.  He’s one of the most innovative street artists with serious skills…read more about him https://www.vhils.com/about

Our weekend was over but we felt we’d seen a lot of incredible street art in Berlin and packed a lot of walking in to just two days.  The Michelberg Hotel was also a highlight.  It’s been fun but I can’t wait to wear a few less layers and feel warm again.  If we visit again we’re coming at a different time of year!